Slow HTTP attacks are denial-of-service (DoS) attacks that rely on the fact that the HTTP protocol, by design, requires a request to be completely received by the server before it is processed. If an HTTP request is not complete, or if the transfer rate is very low, the server keeps its resources busy waiting for the rest of the data. When the server’s concurrent connection pool reaches its maximum, this creates a denial of service. These attacks are problematic because they are easy to execute, i.e. they can be executed with minimal resources from the attacking machine.

Inspired by Robert “Rsnake” Hansen’s Slowloris and Tom Brennan’s OWASP slow post tools, I started developing another open-source tool, called slowhttptest, available with full documentation at http://code.google.com/p/slowhttptest. Slowhttptest opens and maintains customizable slow connections to a target server, giving you a picture of the server’s limitations and weaknesses. It includes features of both of the above tools, plus some additional configurable parameters and nicely formatted output.

The tool works out of the box with default parameters, which are harmless and most likely will not cause a denial of service.

and the test begins with the default parameters.

Depending on which test mode you choose, the tool will send either slow headers:

Repeated until the server closes the connection or the test hits the specified time limit.

Depending on the verbosity level selected, the slowhttptest tool logs anything from heartbeat messages every 5 seconds to a full traffic dump. Output is available either in CSV format or in HTML for interactive use with Google Chart Tools. 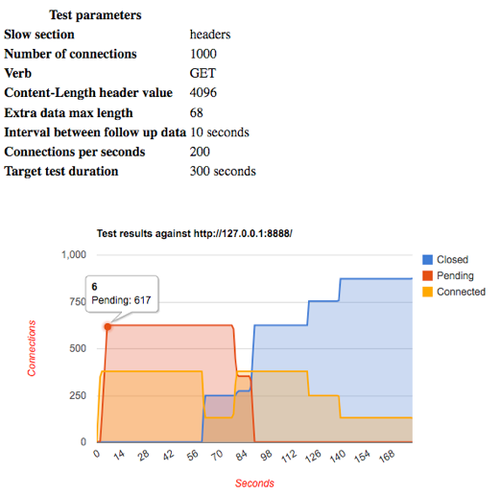 As is shown in the above test, the slowhttptest tool can be used to test a variety of different slow http attacks and to understand the effects they will have on specific server configurations. By having a visual representation of the server’s state, it is easy to understand how the server reacts to slow HTTP requests. It is then possible to adjust server configurations as appropriate. In follow-up posts, I will describe some detailed analysis of different HTTP servers’ behavior on slow attacks and mitigation techniques.

Any comments are highly appreciated, and I will review all feature requests posted on the project page at http://code.google.com/p/slowhttptest. Many thanks to those who are contributing to this project.

Version 1.1. of slowhttptest includes a new test for the Apache range header handling vulnerability, also known as the "Apache Killer" attack. The usage example can be found at http://code.google.com/p/slowhttptest/wiki/ApacheRangeTest.

Version 1.3 of slowhttptest includes a new test for the Slow Read DoS attack.